Before March I rarely baked. Outside of a few misadventures as a kid, I’d mostly made hand pies, and a few loaves of pulla, but bread was mostly beyond me. Just like the yeast that seeded Carl, my starter, sourdough making was in the air. My favorite sourdough baker Acme’s loaves became hard to get from Berkeley Bowl a few weeks into the quarantine, so I decided to follow along with everyone else, and get way too into bread making. 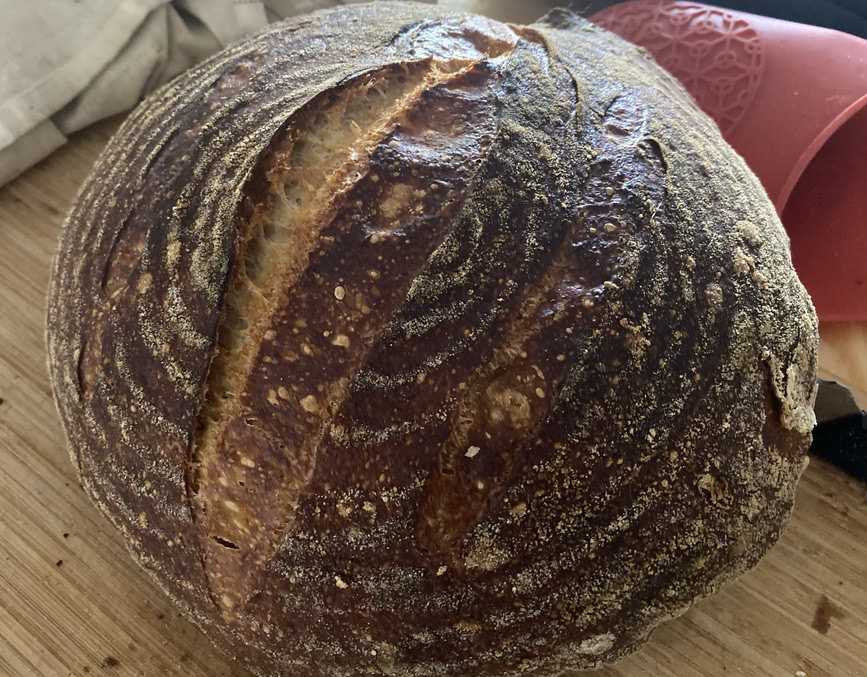 I managed to snag a little flour and using a simple starter recipe from the internet I began to grow a jar full of friends. For the first week or so, I think I had the temperature wrong, because all I managed to do was get a lot of hooch without much of the expected doubling.

After lots of googling, I realized the key was not only keeping the starter in the oven with the light on, but also literally discarding most of it every time I fed it with fresh flour. Ratios, it turns out, are very important. I settled on 30g of water, and 30g of wheat flour ever afternoon, and before much longer, I was getting a lot of activity. 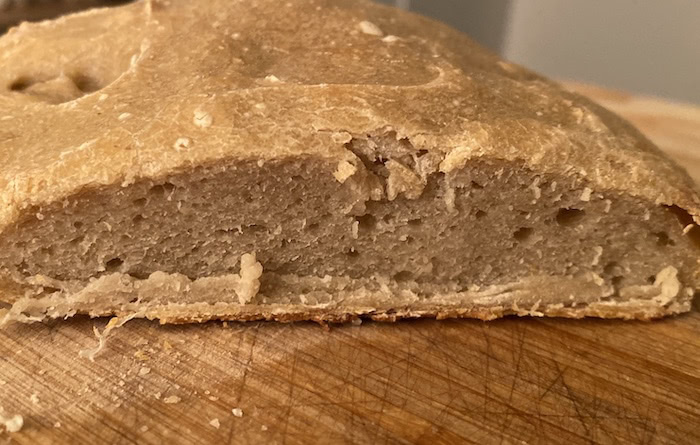 My first loaves weren’t anything to brag about, but they were vaguely edible. I began to make bread before I really settled on a good recipe, and definitely before I had an active starter, so they were flat and dense. By my 4th loaf, I was approaching something I recognized as bread, and by my 6th, I was consistently getting a decent rise and crust. The biggest lessons during this time were around using my cast iron with and without a lid, and figuring out how to do timing so that I wasn’t trying to bulk ferment until 2am.

Timing would be a lot more challenging if I had to go to an office every day, so potentially I’ll have to really figure it out when I’m back to commuting next year. I’ve seen a few helpful tools for determining timing, but if I stay deep into the bread game, I might be waking up a lot earlier in 2021.

With some hobbies I’ve gotten into the tools of the hobby way before I had any real talent or experience doing it. For baking, I started with very little. I had a 6qt Lodge cast iron pot, some dish towels, and a few metal bowls and glass jars, and that was it. No couché, no lame, no bench knife, and no banneton. As I kept making loaf after loaf, I quickly learned why bakers use these tools.

I struggled every loaf with stickiness, as unbeknownst to me, my recipe, which was a modified Tartine one, was very high-hydration. I ordered a banneton first, then rice flour to help coat it. next I added a large couché to my kitchen island for resting after bulk fermentation, and covered it in a dusting of wheat and rice flours. Everything go much easier. Finally I added a lame, which is basically a razor blade on a stick, to make cuts that turn into gorgeous bread valleys in the oven that allow the loaf to expand without tearing.

My kitchen still doesn’t include a bench scraper, but since I mostly make single loaves, that’s worked out ok. Once I learned to work with my dough with wet hands, I didn’t deal much with stickiness either. When making high-hydration recipes, folding and light touch are your friends—no kneading needed.

After 10 or 12 loaves I started learning the small things that could compromise my loaves. Dropping proofed dough too hard into a cast iron can blow out air bubbles, which hurts the oven spring. For my fridge at least, I need to let my dough sit out for at least 5 or 10 minutes or it’s too cold going into the oven, which also hurts spring. A friend recently mentioned how every recipe has to be tweaked for your kitchen, and the seasons and temperatures, and he was super right. As we get to Bay Area summer, I can already tell I won’t need the oven to bulk ferment, and my starter will activate fast. Every little thing reminds me that this bread is a living creature, enlivened by a colony of yeast that I guess I now have a symbiotic relationship with.

Ultimately, bread is amazing, and I’m so happy I started making it. Long live the sourdough yeasts. Long live Carl.