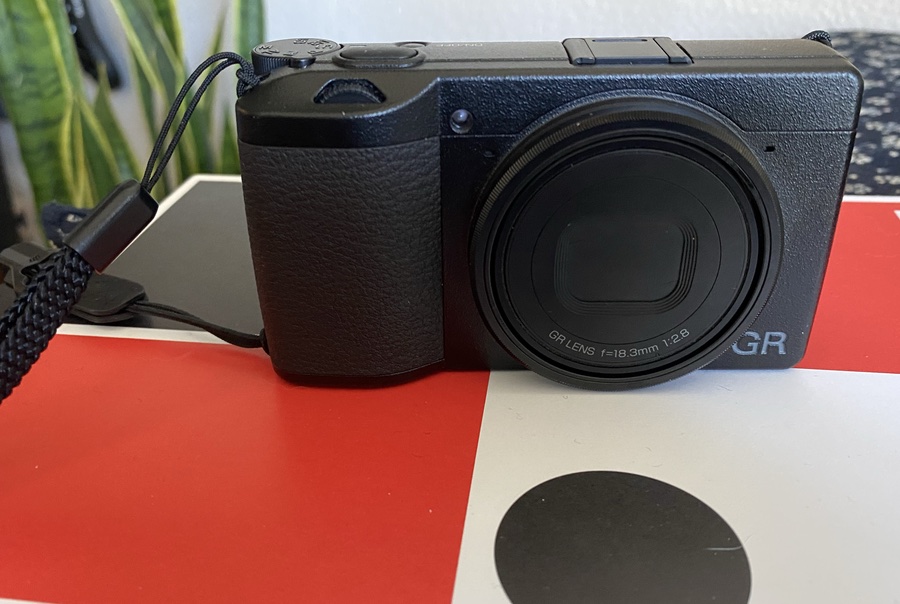 In the before times, I travelled a lot. On average I flew 25 times a year, and left the country on 2-4 of those trips. I’ve written a lot about traveling light, so it won’t surprise you that I usually bring my iPhone as my sole camera. A few years ago, I picked-up a Canon G9X Mark II to take with me to Singapore and Reykjavik. 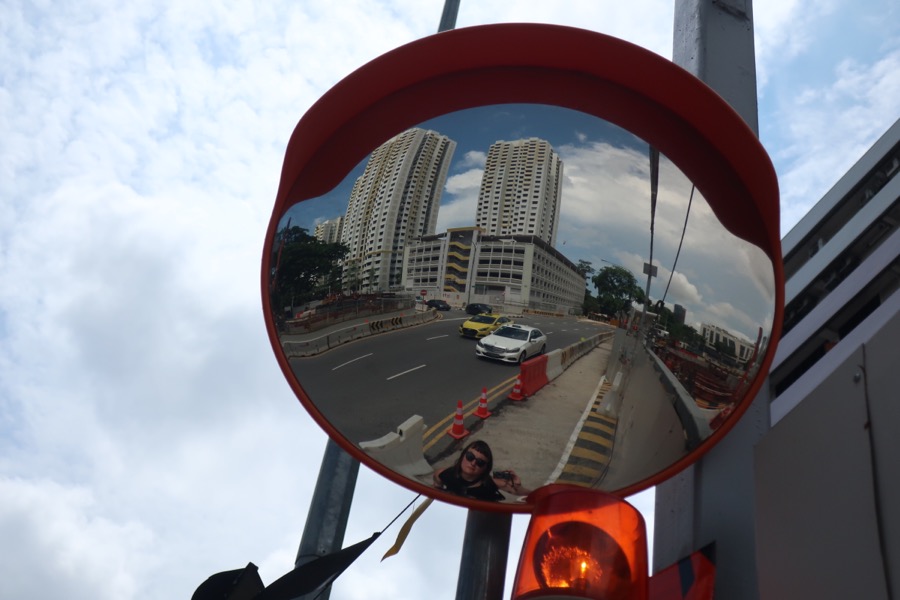 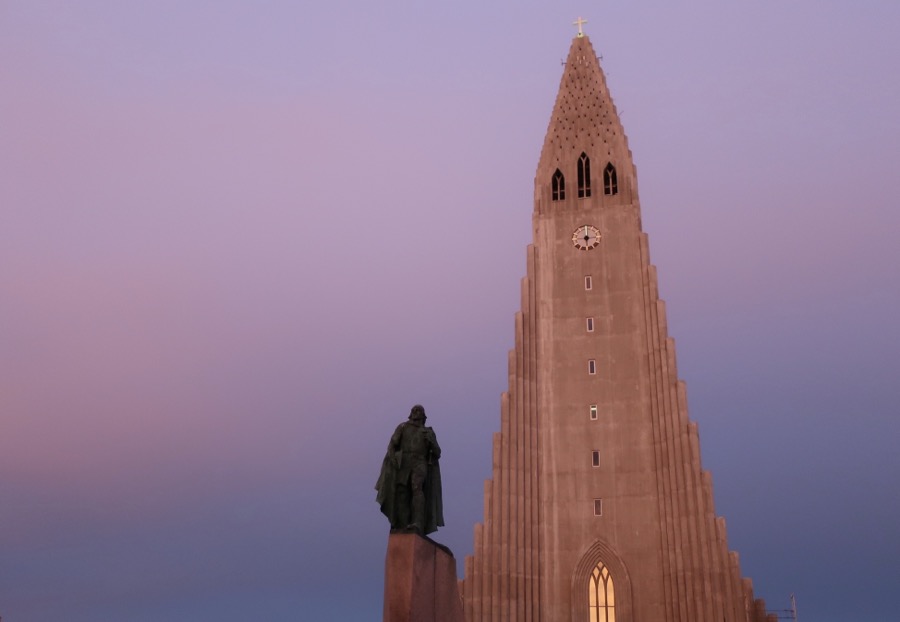 While I enjoyed the size of the camera, and the high-quality shots, at the end of those trips, I largely stopped taking it with me because the trade-off in packing wasn’t worth the gain. It was a little too frustrating to carry one more thing with me while hiking or wandering the city too. 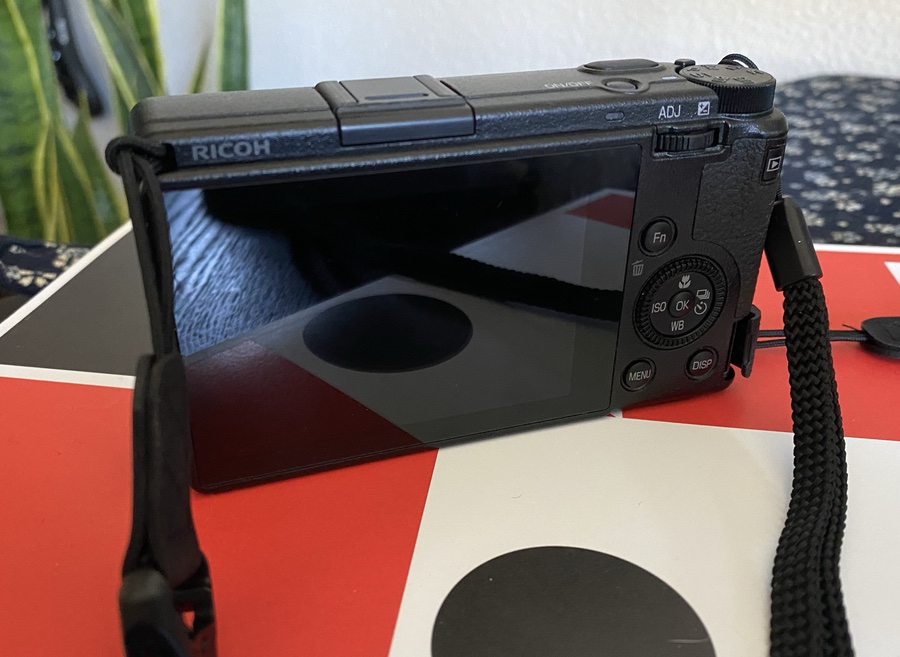 With that said, it likely seems strange that I just bought a Ricoh GRIII, especially during a pandemic when it’s unlikely I’ll be going much of anywhere. What convinced me to try the second camera thing again was both a lingering desire for a GR that I’d acquired when friends had film Ricohs in college, and a little bit of wanting to focus on shooting photos and not immediately sharing them with the world. It also doesn’t hurt to have a new hobby that encourages me to walk and ride my bike around.

In the short time since my trips to Iceland and Singpore, sling bags became very trendy, and with them, the easy way to bring a camera and nod much else along for an adventure. With nothing more than my phone, a usb to lightning cable, and my GRIII I can take photos, transfer them quickly, and edit them using Darkroom or Polarr. When it’s chilly, or I’m on a bike ride, I can either stuff this into my jacket or a bike bag, and my hands are unburdened. I also picked-up a strap from DSPTCH so I can wear my camera when biking or walking. I’ve found in the past that it’s pretty helpful to have a stabilizer strap as well, so I added one to my kit. 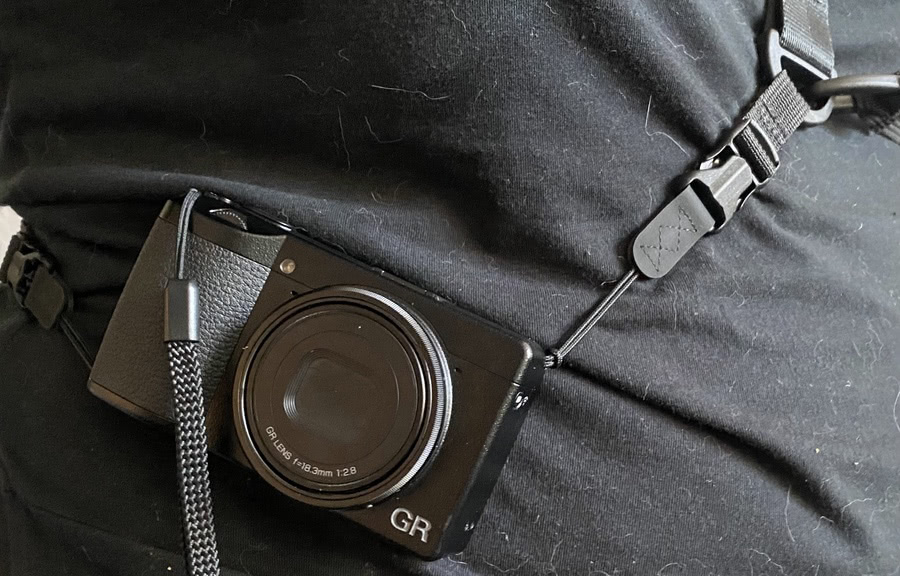 With a bag or a strap like this, I’ve found that sans-flying, just carrying the camera around is very easy, especially if I shoot regularly during my walk. It’s pretty easy to bring a spare battery in a pocket too. When I had my Canon with me on trips, I made the mistake of not having a sling pack or a strap for it, so there was a lot of hassle that I’ve now solved.

In the last section, I mentioned bringing a spare battery. Usually digital cameras shoot for 250-400 shots between charges, but the GRIII seems to be on the low end of that scale. I’ve only gone through one charge so far over a few shooting sessions, but the copious warnings online about the battery life meant I immediately ordered a spare and keep it with me just in case. I got two Wasabi spares with a charger for cheaper than a first-party battery, and so far they seem to not cause issues. An incredibly convenient feature on the GRIII is that I can plug the camera body into a USB-C battery or my iPad to charge it up pretty quickly even if I’m not near a spare or a wall socket. 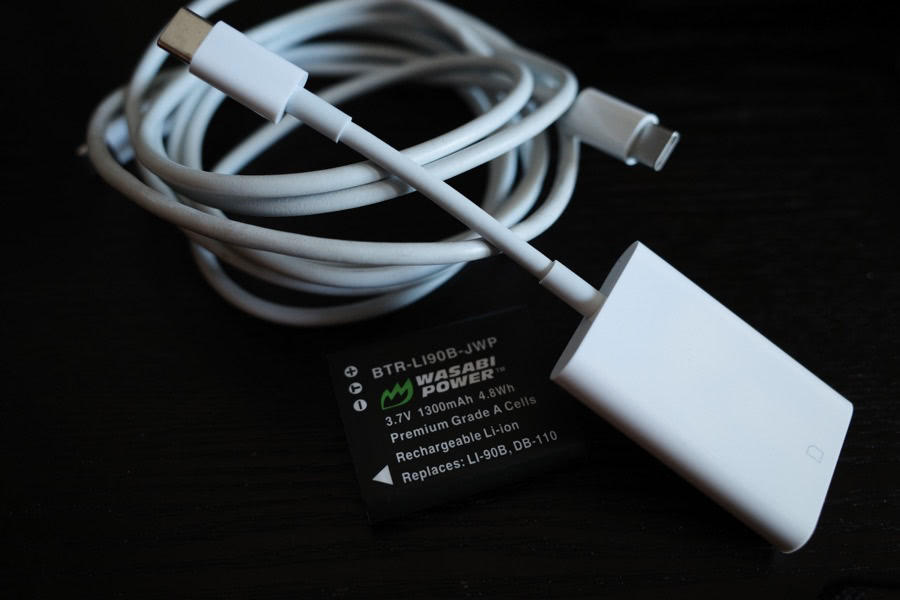 Whereas my Canon camera used micro USB like my damn Kindle (c’mon Amazon, put a USB-C port in the Kindle already), the GRIII uses a USB-C port like my computer and iPad, which means I only need to bring a single cable to charge any of those devices. I bought a USB-C to SD card reader as well, because it’s pretty nice to take out the SD card, and plug it into my iPad after shooting, especially if I want to go somewhere else to edit photos without my camera. Ricoh also offers an iOS app to do remote shooting, or transfers, but the speed seems to be a little slow, so I would likely only use this feature in an emergency. Part of the appeal of a camera that isn’t a phone is thoughtfulness and not rushing to get a photo onto my site or micro.blog, so having a little barrier there is relaxing.

Previously, I would’ve scoffed at this, but then the pandemic happened, and I reevaluated my relationship with Twitter after leaving Instagram a few years ago. Plus, my iPhone is totally fine still for joke photos if I some reactji on Slack. 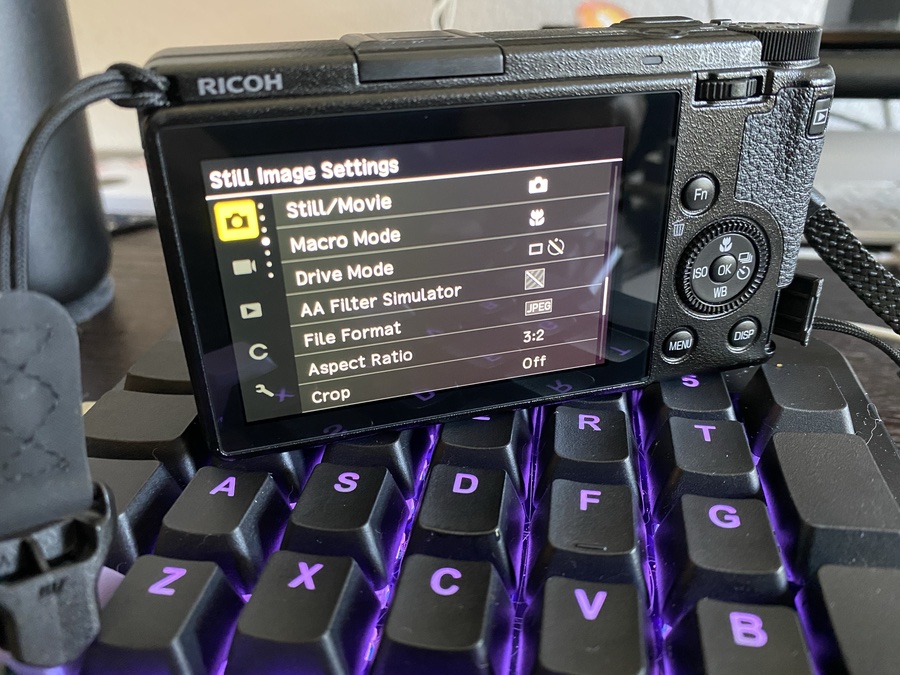 There are a bunch of nicely resistant buttons on the GRIII, as well as a surprisingly-good touchscreen for the rest of the selections. I’m not sure what kind of processor is in this camera, but it’s fast and responsive when I’m deleting, zooming, or changing settings. Additionally, it’s as easy as thumbing the DISP button to cycle through screen options while shooting, including turning the screen off. I haven’t used a ton of digital cameras, but this is easily my favorite menu system and settings selection.

What’s it like to actually shoot photos with the Ricoh?

In a word, fantastic. 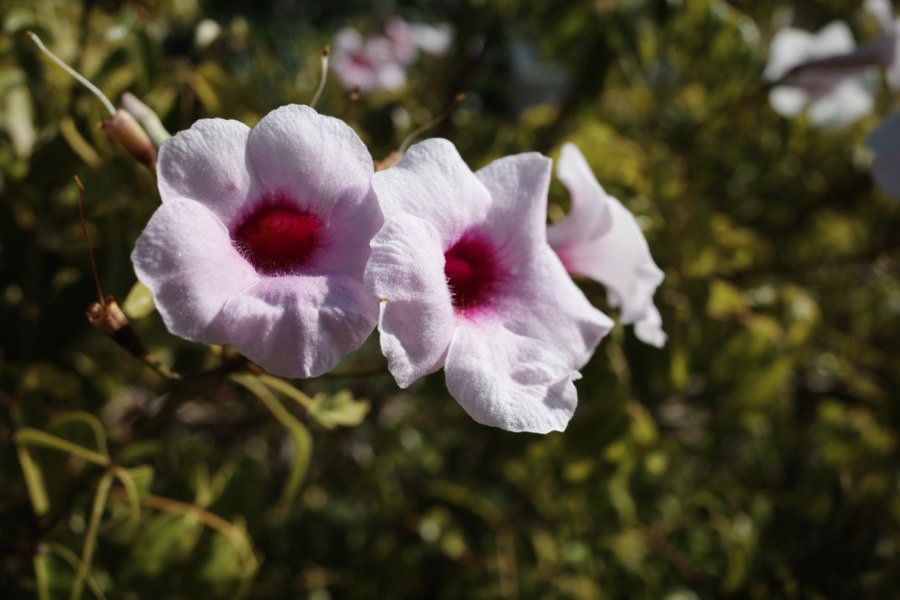 Between the incredibly quick startup, fast burst, and great lens, every time I want to shoot a photo I can do so easily. I don’t mind walking to zoom, and am pretty used to it with my iPhone, so the 28mm lens is a delight. Even without a tilting screen, it’s pretty simple to know what I’m shooting, and capture the image even without looking at the screen, especially with the snap focus option which lets me choose an automatic focus range for a full-press of the shutter button. I’d heard a little bit about focus hunting, but I’ve found that generally the GRIII finds faces and objects with ease. I also love mode selection ring with a lock, to ensure I don’t accidentally revert to P or M when I wanted my own user setting—oh and there’s 3 of those.

The video, as many other reviewers have stated, isn’t very good, but if I want to shoot video (which is rare), my iPhone is just fine.

If you want more specs. 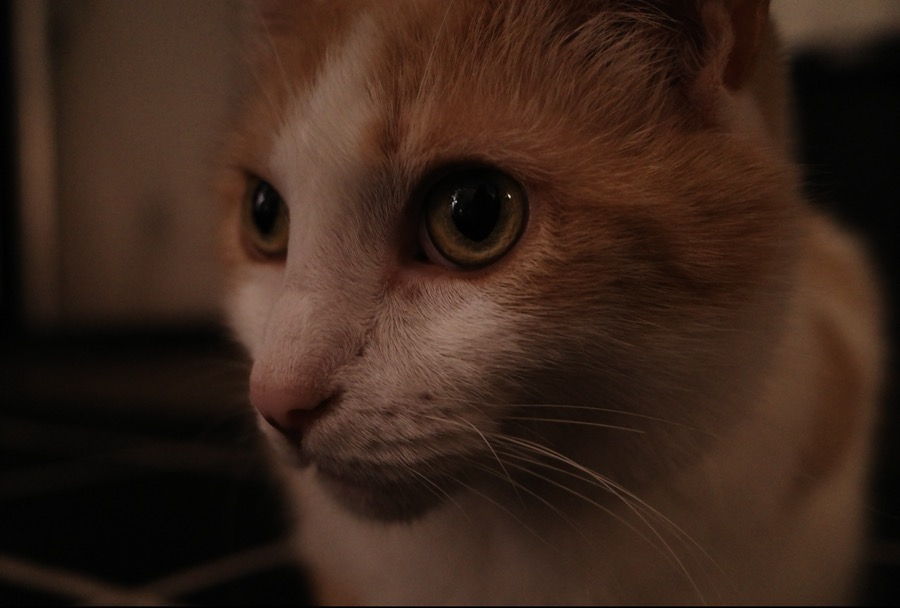 I love this camera. Between the quality of the photos, the feel of it in my hand and the generally indefinable coolness the Ricoh GRIII is with me pretty much any time I leave the house now. I can’t wait to travel with it to Japan again, or even take it with me backpacking in the near future. If you like shooting street photography, or like me, just want to take photos of your cat and surroundings without notifications interrupting your walk, pick one of these up.