Or, how I reprogrammed my brain to understand an ortholinear keyboard.

During my work from home, I’ve slowly upgraded my computing setup to keep me from constant soreness. First, it was a real deal office chair and desk, then a monitor. Finally this week, I added a split keyboard to alleviate wrist issues.

A history of keyboards 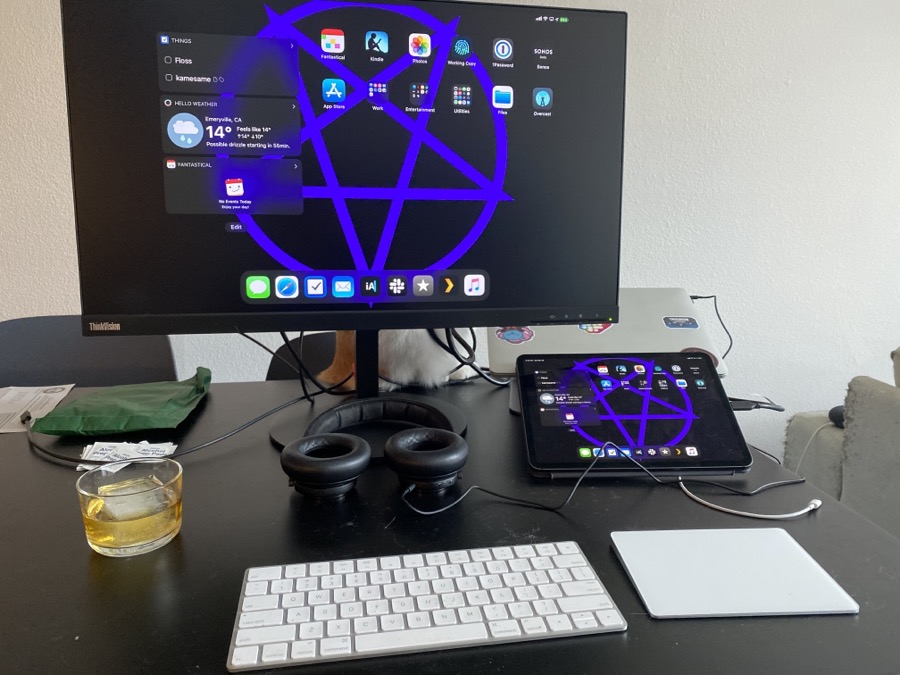 For years I’ve written primarily on a MacBook or iPad keyboard, which is pretty cramped and ensures my trainer tells me to do more ITY stretches all the time. In the office I tried using a Microsoft Sculpt for some time, but I hated their weird wireless dongle. Not only was it frustrating to put a nubbin in a USB-A port, but it seemed to interfere with other ports or wireless signals.

A number of friends are huge mechanical keyboard enthusiasts, and I’d seen them around work pretty constantly, but I never really wanted one. For me, a woman who enjoys the MacBook 2015-2018 keyboard, and the iPad Smart and Magic keyboards, I didn’t think I would enjoy the force required to activate the keys, or the longer travel. I also worried that in an effort to move to a more ergonomic keyboard, I might ruin my ability to type on a regular one. I still don’t know what made me take the plunge, but I bought an Ergodox to get going. 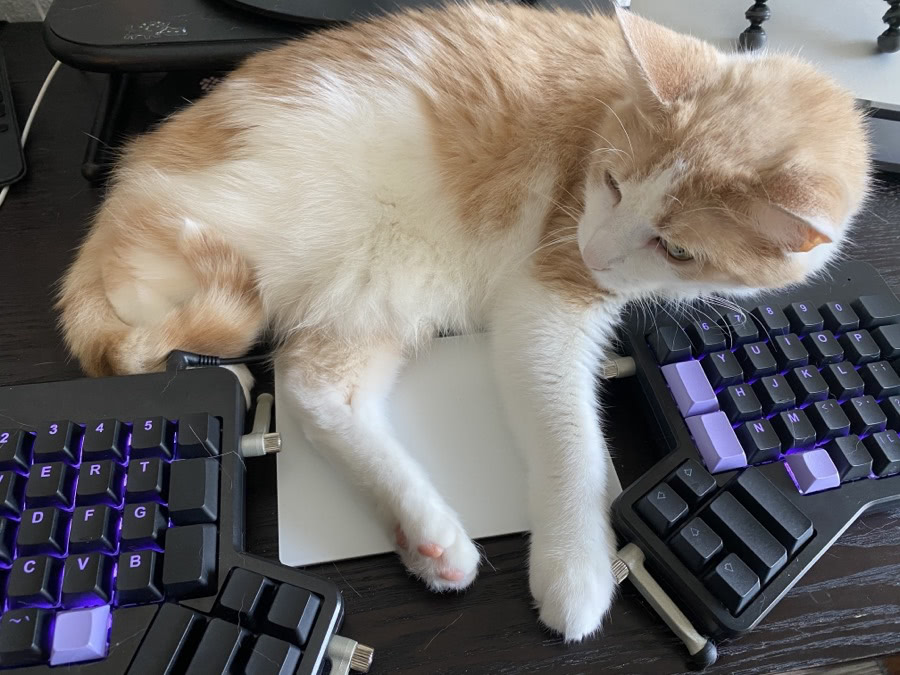 Plugging in my Ergodox, my first thought was, “this is so utterly weird!” I quickly realized I’d need to program my keyboard to more closely match what I’m accustomed to on a Magic keyboard, which meant I spent quite some time on Oryx (their graphical configuration tool). After a few missteps and missing keys (turns out not having a = + key can be an problem, who knew?!), I settled on this: 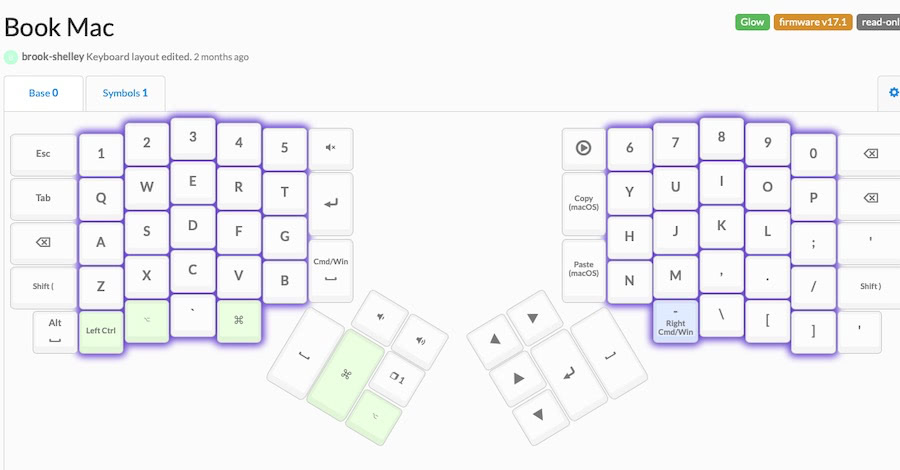 Loading the configuration was super simple, and blazingly fast, which encouraged me to experiment and play around with new buttons. I gave myself quick keys for Alfred and Spotlight, as well as some easy copy and pastes.

I quickly learned I had some issues with overreaching various keys, like the b, and I would need quite a bit of practice before I stopped saying “damn, damn, damn,” and frantically backspacing. My coworkers this week have seen a huge increase in accidental messages, until I figured out a better place for my enter key than “exactly where my quote key was before”.

I’m slowly finding a rhythm with typing alphabetical characters, but I think it will be quite some time until I’m able to quickly choose random characters. I’m trying to learn which characters I use most often, to ensure they live somewhere on my first layer, and my second layer is dedicated to the rarely used characters that I don’t mind looking down to find. Without keycaps that reflect the layers I will definitely run into the issue of not being able to look down to remind myself of where things are, so maybe I’ll pin a screenshot indefinitely on my desktop.

A few friends who’ve used these keyboards assured me I wouldn’t be ruined for regular layouts by using the Ergodox, but I’ve already found myself trying to backspace on the left side of the keyboard or hit the area around the spacebar to press enter. I think I should be able to type on two different keyboard layouts in turn eventually, but for now it’s still confusing.

My WPM went from an abysmal 50 to ~65 after the first week of use, and my hope is that it keeps climbing back up to my more usual 85+. It’s still too early after two weeks to tell if the Ergodox is helping my wrist and shoulder issues, but they at least aren’t exacerbated.

I quickly learned after ordering my keyboard that there are myriad custom options from keys to cables, not to mention different switches that you can replace. I ordered a few keys and a few cables to play around with the aesthetics, but other than a shorter TRRS cable, I don’t think any change has really effected my use much. I put purple keys into the spots for alt, ctrl, and command mostly to help hone in on those modifier keys whenever I get lost.

A word of warning: many awesome keysets are group buys with long lead-times, so it’s best to think of ordering a few and then forget about them and have the package as a surprise later. 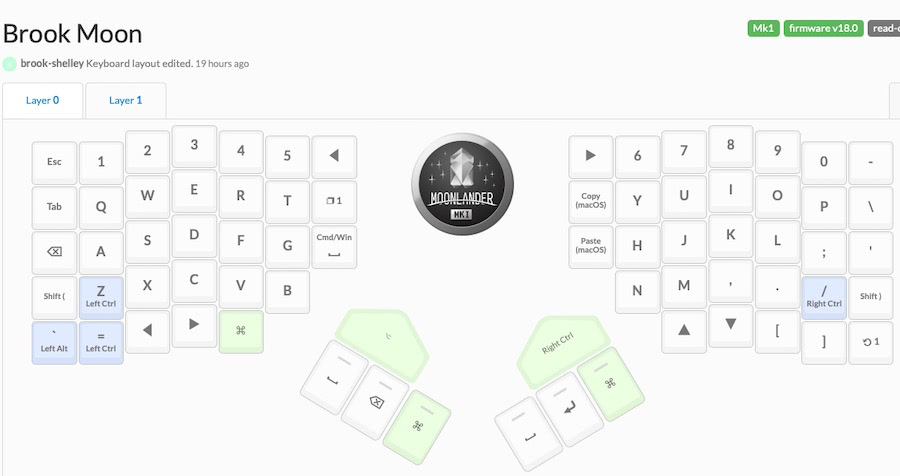 Imagine my surprise, a week after getting a new Ergodox when ZSA announced a new keyboard just as I settled into using mine. I couldn’t resist the siren song of “next-generation ergonomics” or the idea that this keyboard would be more portable, so I picked my second ZSA keyboard in black and waited for it to arrive from Taiwan.

The clack of the keyboard tells me I’m back at work, and at my desk again for the next 4 days. 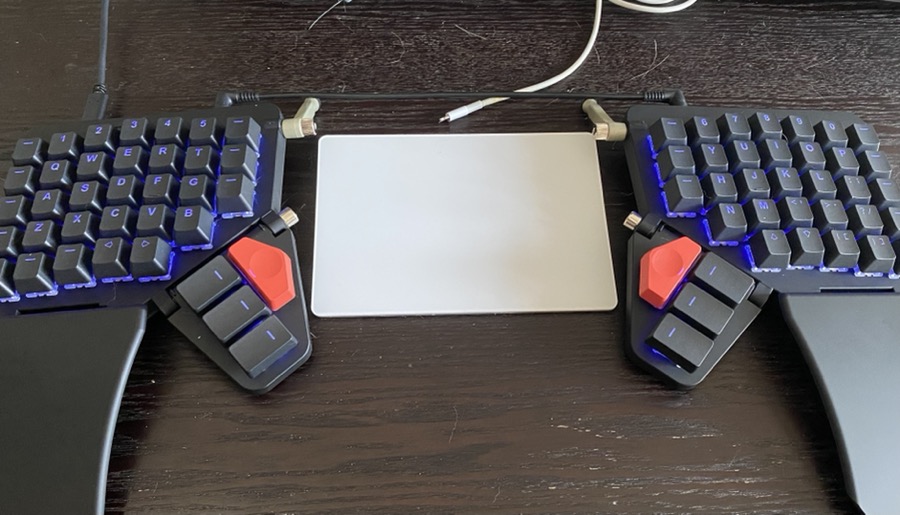 After quite a few weeks with my Ergodox, my Moonlander arrived. I immediately set it up, then forgot what the default layout was. Eventually I got Wally launched and loaded my layout, only to tweak it a bit to make some of the keys more usable. The big red keys are a little challenging to hit, but my main issue was finding a good command layout for doing cmd+k in Slack constantly. It’s funny how the keyboard shortcuts that are so common become so integral to how your keyboard is laid out. Perhaps I’ll make single key macros at some point too.

By the time my Moonlander arrived at the end of September, I’d become pretty accustomed to my Ergodox, and been through a dozen or so tweaked layouts. My typing speed is around 85wpm again, but the most important part is my wrists and hands feel way better . I went with Brown switches for both of these keyboards, and even though they’re not very clunky I feel pretty happy with the sound. Surprisingly, typing on the iPad Magic Keyboard still feels nice  too. When I first started using these new keyboards I worried that the cognitive load of hopping between them and a regular layout would be too much, but so far, it’s easy. I don’t relish the idea of doing a Dvorak setup though. 

Switching from a standard keyboard to an ortholinear mechanical keyboard is no mean feat. I definitely struggled the past few weeks with various issues typing rare, but important keys, as well as remapping my brain to remember where I’d put everything. Overall though, for the comfort and feel, I think it’s worth it to try one. We’re stuck at home in the states for at least 6 more months, so why not take up a weird keyboard hobby in the meantime.