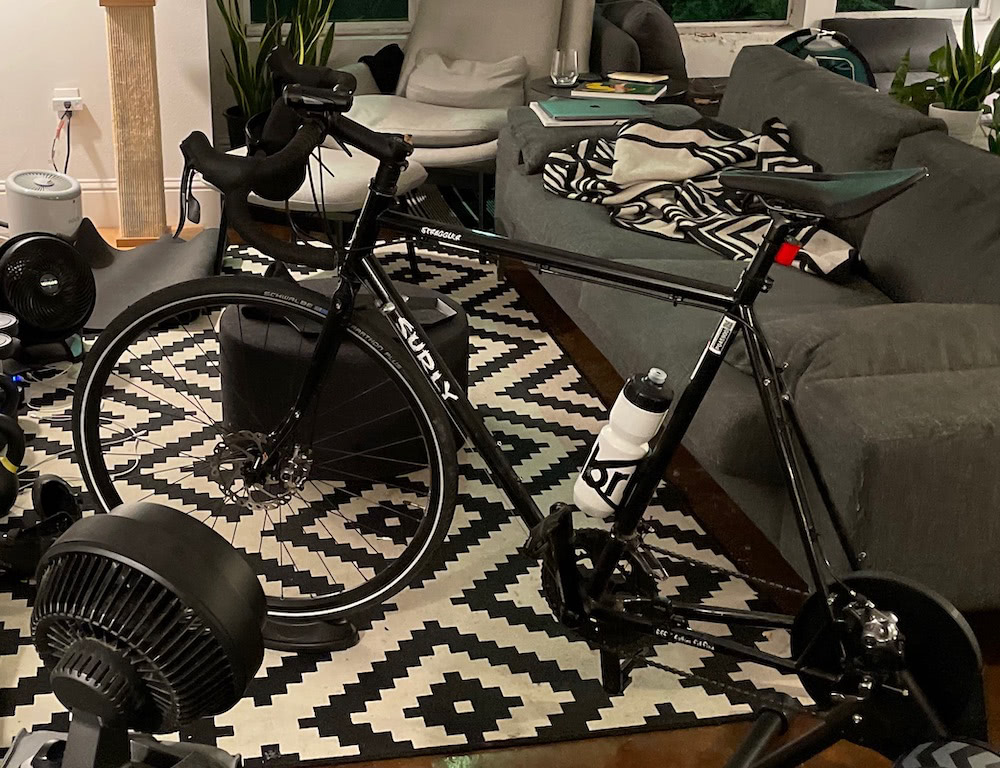 With the weather outside being rainy and chilly this winter, I’m happy to get to ride indoors. After buying spandex and clipless shoes the next step was getting a Wahoo Kickr Core and signing up for the terrible video game Zwift.

This first week of riding inside, I’ve learned quickly how hot it can get in my house unless I have fans on full blast, and how much laundry I’m going to need to do regularly.

Riding inside is brutal! It’s different than outdoor riding since I can’t coast much, and don’t have the regular landmarks I count on yet to depend on. However, it’s lovely to not need to stop for stop signs, or worry about cars or a helmet. I’ve got snacks inside, and a load of water bottles. Hell, I can even take a bio break upstairs on my toilet instead of awkwardly stripping my entire bib off.

Starting off with my rides, a friend informed me I should “figure out my FTP”, which first meant learning what “FTP” even was. This video does a good job of talking about how FTP is used for training, and how variances in style and weight can change how FTP shows up for folks.

Inside of Zwift there are a few different sorts of FTP tests, but that same friend suggested a ramp test, which starts you at a 120w spin after a warmup and encourages you to hold that at 80-90rpm as it increases by 20w every minute. Eventually, your legs stop working, and you give out, and at that time your FTP is calculated based on your FTP demonstrated during the past few minutes.

I’m told doing this test is a good thing to continue during training every few weeks to see your progress. I decided I would need more fans and towels.

With my FTP calculated, I could now figure out various target zones for training, so that I could to a certain degree estimate how much effort I could do on a ride before I got exhausted. Part of parcelling this effort out, includes learning how to spin instead of grind.

As a former fixed-gear rider, I tend to try to climb any hill in a high gear, with a lower RPM and a LOT of power on the pedal, but for knee reasons, and a desire to not become more lactic acid than person, pros and smart amateur road cyclists tend to keep their RPM around 80-100 even on a hill, shifting higher to spin right up any big hill. With the exciting addition of 10 tooth cogs to new chain rings, there’s even more possibility of wild gear ratios. It’s nice not needing to ride everywhere on a 48/16 gear ratio like I did on my old Panasonic fixie.

When I rode fixed gears, I was smoking cigarettes all the time, and drinking pretty. I was using my bike as my primary form of transportation bc my car didn’t start, and my friends were broke cyclists. Those days riding 10-20 miles a day while bumping around to see pals, or buy beer, or goofing-off was normal. My fear of cars and mortality was much lower, and I was an old hand at replacing my tubes on a ride.

These days, my body is much older, and my desire to be alive is much higher, and going on longer rides outside feels tricky. This is clear during the COVID-19 pandemic, as riding outside brings an even further risk of contracting a debilitating illness. No thanks!

Indoors though, other than heat, sweat, and exhaustion I can ride indefinitely. No matter how far I go in an hour, I don’t have to turn around to come home either, because unclipping and stumbling upstairs leads me to my shower, or a snack. I’m unlikely to be a big distance rider any time soon, but in my first week I managed 100 miles of riding with a few 10 mile rides, and one 14 mile ride outdoors over the weekend, as I was buoyed by my indoor training.

During a work day, I’ve found I can do a 30-40 minute ride with plenty of time for a shower, or a 20-30 minute ride with a shower and cooking. It’s nice to get a few miles in before the sun sets, and then have a few hours to eat food and work before doing something else on the bike or off in the evening.

There are a few events I’ve checked-out on Zwift, even though outdoors I wouldn’t want to ride in a tight group with strangers.

Women’s-only events happen almost daily, with everything from races, to recovery and exploration rides. Because I love a competition, I’ll check more of these out as I train.

At the end of week one of Zwifting I decided to sign up for a group D (0-2.5w/kg) race around Central Park in NYC. I watched a few videos to prepare, and even read race notes for the various sections of the course.

I learned that Zwift races start with a sprint, but settle down to a tempo pace or higher afterwards. I dutifully cranked out of my saddle as the countdown to racing hit 0. I held on to first place for the first quarter mile, but then got overtaken by a much stronger rider.

I was firmly in second or third until we hit the Harlem hill that sent my heart up to 189bpm and left me utterly destroyed. Carrying my 128kg frame up a 10% grade means putting down a serious amount of power at almost any speed.

At the end of the race, I came in 4th out of five racers, but averaged 221w of power over the 20 minutes on the course, meaning I had the highest raw power output of the group, despite having a comparatively low power-to-weight ratio. The first place racer in my group put out 2.5w/kg of power throughout the course, to finish at 16 minutes. To put this in perspective, I would’ve had to put out 320w for the entire race on average to keep up with her. I think it’ll be a few more months before I get anywhere near that, but at least now I know what the gap looks like.

The other way to increase my power is to lose a few kg, but currently I’m in the “eat everything in sight” stage of daily cycling, and we’ll see if getting down to race weight ever becomes a consideration. I think it’ll be much easier for this lady to convert more of those kilos to muscle mass so that I become one huge walking quad.

I’m writing this now in my second week of indoor riding, and I love it. I took a rest day on Monday, to give my legs time to chill out. I’m quickly realizing how much my body will need yoga and other types of stretching in addition to water and protein, I’m trying to incorporate a lot more of both into my life. I’m loving Apple Fitness+ for everything that isn’t cycling, and this feels like it dovetails with my love of core and strength training.

Let me know if you have questions about indoor biking, or want to add me on Zwift, we can ride together. One day, I’ll even try riding Mount Diablo or another excitingly adventurous ride outside. But first I need to learn how to spin up that hill.