After writing this post, the leadership at Basecamp wrote this truly damning post about their attitudes towards societal change in a pretty strong signal that putting your fingers in your ears and going nah nah nah is their decision.

Casey Newton did some excellent journalism to further explore what exactly occurred over there, followed by more information on the buyouts that Fried and DHH offered in the aftermath. The whole story is still developing, but it’s also fascinating to watch mostly older white guys in tech defend and back up the decisions of those founders before more information arose, then suddenly get real, real quiet.

Due to this I cancelled my subscription and will no longer use or recommend Hey or Basecamp’s products. None of us can pretend software or “work” happens in a vacuum, and doing otherwise is just acquiesing to the current world that uplifts and protects white supremacy and inequality.

The post below will stay up, and while I still think the software is neat, I can’t in good conscience use or support it. 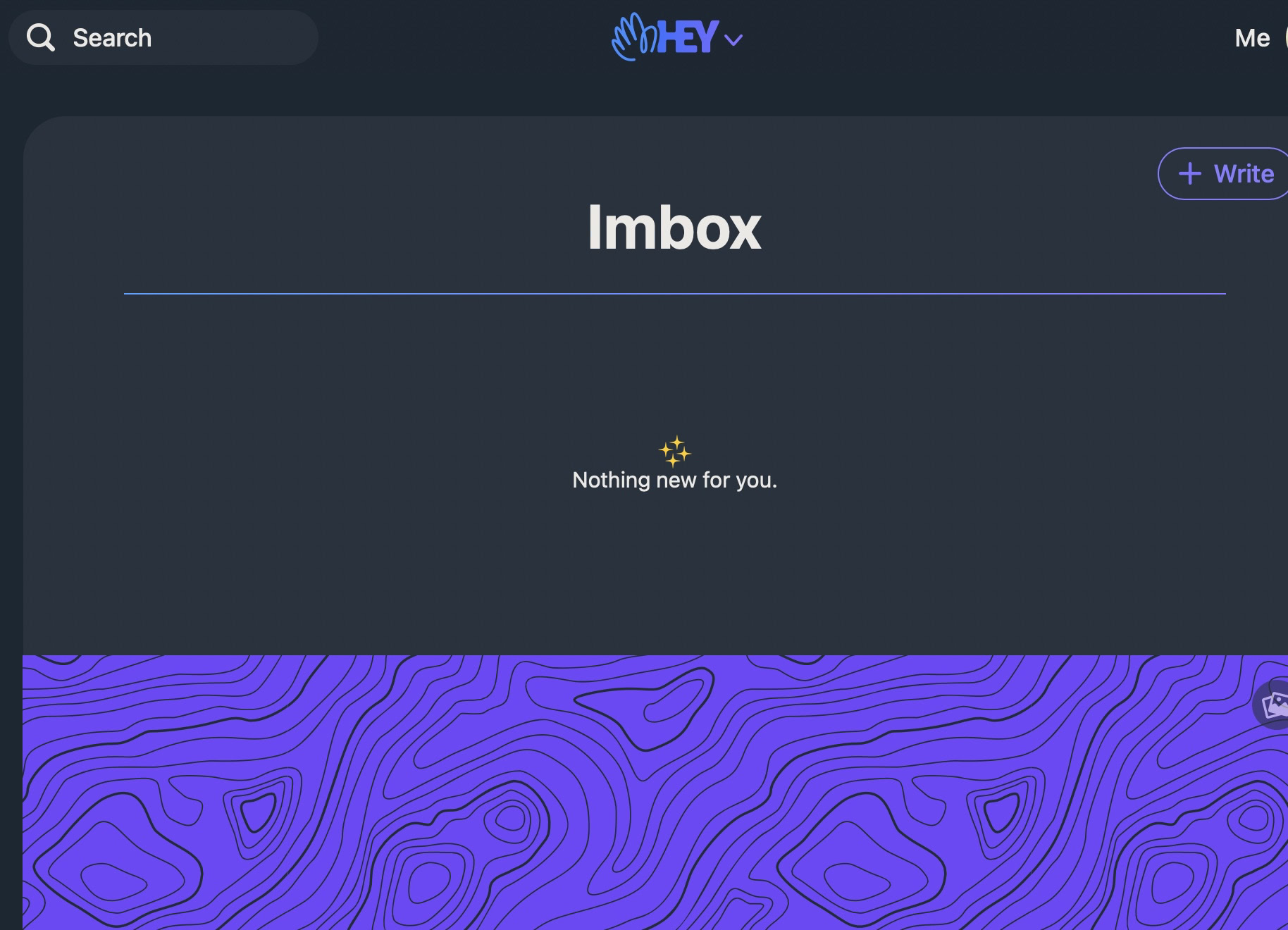 With the announcement last year by Basecamp of Hey, which the Verge called:

Intrigued, I signed-up for a trial account. I’d used Mailbox, Inbox, and every other fad email app or service in the past. Even by last year, I hadn’t felt the need to pay for an email address, and was jumping between clients looking for the best thing. Between Sparrow, Tempo, Airmail, Edison, Gmail, and recently Mail.app, I wasn’t ever satisfied. Partially, this was due to my desire to play with new toys—I switched around because I could.

Email is kinda neat, and maybe a lot of the the things folks don’t like about email are good? I think tools like Slack are better for a workplace, but as an individual getting receipts and other random things for services and from readers, email works for me. It’s an old standard, and an open one, and you can even create websites or use it for newsletters.

With Hey, found client that was opinionated but full-featured.It initially didn’t stick because I wasn’t sure how I could get the dopamine hit of clearing my inbox. Instead, I signed-up for a Fastmail account to host my website’s email, but found myself unhappy with the limitations of Mail.app, which I used out of a desire for more safety and security.

The privacy and information security risks of sharing my email credentials and sometimes the contents of emails with various app makers and providers who benefit from my data by selling ads. I’ve tried Proton Mail and Fastmail, and they’re both good services, but the interfaces and apps are both limited and kinda dumpy looking.

After I’d ripped-off the seal on paying for email, I decided to go back to Hey—all $99 bucks of it. Luckily I got my name, and I didn’t need to email people with brookshelley6669@hey.com or something equally awkward. Initially there wasn’t much email in Hey for me, but I redirected a few things and suddenly I was getting a steady stream again.

Initially it was overwhelming to need to “screen” each sender, but since folks message me on Slack or iMessage, I was able to ensure that marketing either ended up screened-out or in the “Feed”. Receipts and other errata could live in the “Paper Trail”. Nothing went to an “Archive” like I was accustomed to with Gmail and other systems. This was a worry at first, but I learned to live with read emails appearing in a list below anything I needed to deal with. Recently, Hey launched a feature that can cover that list with an image of your choosing, which is clumsy, but neat.

I don’t think Hey is for everyone, but I can say it’s working for me, and paying for services instead of having your data sold to pay for them is a great plan. It’s a relaxing feeling to not jump from app to app for a while, and instead know that the one or two times I open my email a day, I can quickly see what’s important, and what’s junk.