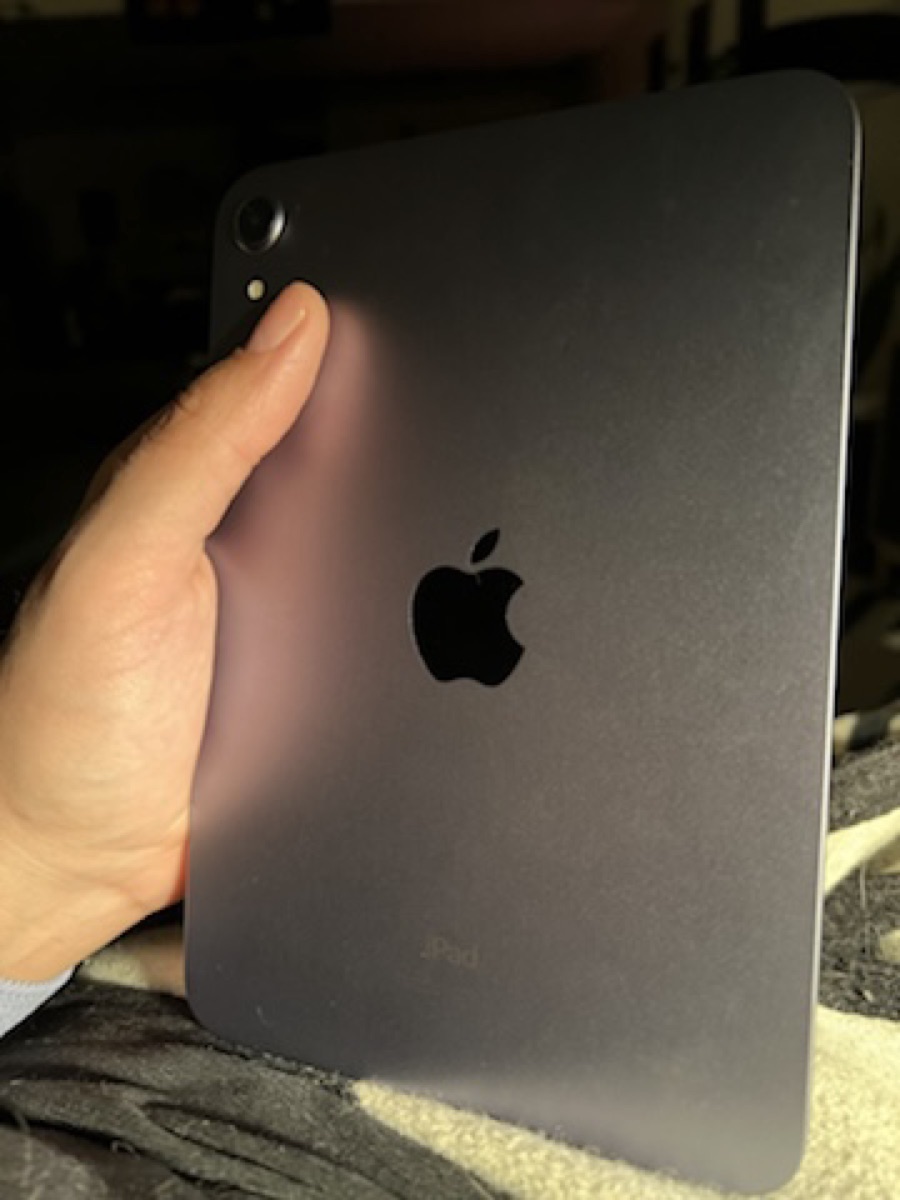 When the iPad first came out, I was working on OS X Server stuff at the fruit stand, and took a long lunch to line up at the nearby store. I loved that iPad despite it not quite doing much that I needed. 10+ years later I’ve had a few iPads, including a 10.5” Pro, 11” Pro, and the first generation Mini.

For the past few years, an 11ish” Pro was my primary travel computer, with its excellent cellular connection and fancy new keyboard case it flew around the world with me and made carrying a laptop a thing of the past.

For the past week, I haven’t touched my Pro, because I’ve been too busy carrying my new purple (in the right light) Mini.

As soon as I took the new Mini out of its box, the size and weight were a welcome change from the sizable 11” Pro I usually lug. At home whether I’m watching TV or cooking, the Mini is the easier machine to pull out, with the power of my phone and a perfect middle-ground in size. With a Studio Neat Canvas and a Magic Keyboard, the package weighs 200g less than my Pro with a Smart Keyboard, which may be minor, bet every gram counts when you pack the way I do.

The screen size is not nearly as limited as the earlier Mini now that the Touch ID/Home button is gone. Its weight is between my Kindle and my iPad and in some ways, so is its function.

Everything I run on my iPad Pro, I run on my Mini without issue. Occasionally, the spacing is a bit weird on certain apps like Discord, but by and large it’s good enough not to worry. With Working Copy, Secure Shellfish, and iAWriter, I can be almost as productive as on my Mac as long as I’m near WiFi, as I chose the non-cellular version out of caution.

When I bought my first and then most recent iPad Pros, the joy they brought me was in both battery life and speed against my 12” MacBook. Since then, the M1 chip shipped in a MacBook Air, and with it came higher speeds and a comparable battery life. For what I do on a computer, the Pro largely only has a leg up on cellular service, and a perverse limit on same-screen multitasking.

Because of the new A15 chip, the iPad Mini is no slouch, and likely compares favorably to both my MacBook Air and my iPad Pro, but it’s not that important to me what the numbers are. The Mini feels fast and responsive enough I never think “wow it’s chugging to a halt,” or even “ah, a judder,” so I think it’s more than acceptable.

The screen size is smaller by a couple of inches, but for the portability gains, it feels like a fair tradeoff. Before, when I would travel with my iPad Pro, bringing it along with a MacBook felt like heavy overkill, but with the new Mini, I could see bringing it easily either solo or in addition to my MacBook. Likely if I start traveling with it, I’ll miss the cellular connectivity, but if that’s the case I can always replace it with one that has that feature.

Typing-wise, I’m using the Magic Keyboard to type this right now, and it’s totally fine. I wish there was a little trackpad below the keyboard as there is on the Smart Keyboard, but because the iPad is so small, and keyboard shortcuts are so capable, the few occasions where I need to touch the screen aren’t too much of an impediment to feeling able to type and browse around. If you depend on a mouse or trackpad for most actions, you’ll want to connect one via Bluetooth or USB-C, or honestly, just get a MacBook.

When I pick this iPad up off the small keyboard stand, or from my nightstand, it feels more like a big phone than an iPad or computer, so reading on it or typing with an onscreen keyboard feels much more ok and less frustrating than on the Pro. I may not be super fast with the soft keyboard, but I’m sure-as-hell faster on the iPad Mini version than the Pro one

And this, I think, is one of the cruxes of the delta between the current Pro and the Mini. The Pro feels like a laptop that is kind of portable, whereas the Mini feels like a tablet that can pair to a keyboard for inspired writing sessions, but is equally comfortable sans keyboard so text of chat with friends.

Is the battery good for a week between charges? Not likely if you use it for hours at a time, but it can easily make it through 1-3 days of usage depending on conditions and usage. When it is time to charge the Mini it has adopted the USB-C port that the Pro has had for some time, which means faster charging with less cables in my bag, unlike my Kindle.

I haven’t been able to test a cellular version of the Mini, but I’ve read the two have a similar weight and battery life, which is fortunate if you’re choosing between the two.

It’s clear from the jump that a Kindle soundly beats this iPad on weight and battery life, but that’s where the advantages might stop. I enjoy an eInk display, but the previously touted advantages over a lit screen for bedtime might be overrated. Sure, on a bright, sunny day, a Kindle will be easier to read, but most of my reading is done indoors, on transit, or in bed.

Where the iPad completely leaves the Kindle in the 90s is its ability to watch movies, browse the web, play gams and use every app in the iPad app store. I can’t update my blog from my Kindle, and I definitely can’t easily read books and articles from the web. In the past, this meant bringing both a Kindle and an iPad or a Mac with me on planes, but perhaps now those days are over.

I don’t know the next time I’m flying somewhere, but if I do, my new plan is to bring my iPad Mini regardless of if I also bring my Pro or MacBook. If I bring it as a second computer, I’ll likely leave the Canvas and keyboard at home, but I like the idea of bringing it and a keyboard as my only computer.

This is the palm-able, portable iPad I want to read books, comics, and websites on. It’s not a laptop, but it does just what I need. For traveling or as a second screen at home, I think I’ve found my new go-to device.